It is a Camino tradition to carry a rock during one’s walk to the Cruz de Ferro at the highest point of the Camino Frances and leave it there. The idea is that you carry your burdens – symbolized by the weight of the rock – to the cross and there you leave them behind. Some say the practice began when the Santiago cathedral was being built and people brought stones to contribute to the materials. It’s a beautiful sentiment – but my Camino Cuz and I won’t be participating because we are not taking the French way.

However, just because we won’t be passing by the Cruz, that doesn’t mean we can’t do some symbolic rock-leaving thing. We thought maybe we could find the highest point on the Primitivo and leave our rocks there.

Sounds simple enough, but this plan has proven to be more challenging than I expected.

Take Me to the Top

For one thing, I can’t seem to find a definitive high point or any elevation maps sufficiently detailed to pinpoint the top of the route. It also changes depending on which route option is selected.

One pilgrim believed the highest Hospitales point to be a hill near the ruins of the hospital La Parodiella. It’s apparently over 1,200 meters (about 3,900 feet), but even she wasn’t sure about this, and I have not been able to confirm it either.

The second difficulty is choosing a rock. While a rock might seem the obvious choice, that’s far too easy. Like everything else about this trip, I have spent more time thinking about this question than is probably warranted – but that’s part of the fun for me, so don’t judge.

I wanted my rock to have some kind of real connection to my symbolic burden. That, of course, meant choosing a burden! (Maybe my Camino planning is the burden I should leave behind on the Camino!).

In all honesty, I’ve been fortunate to not have many life issues that I need to get past. However, a series of incidents at the educational ministry where I spent a large portion of my adult life seemed to keep suggesting itself. I won’t go into detail, but suffice it to say that what began as an idealistic leap of faith turned into a promising career that I eventually walked away from due to deceit, betrayal, and some harsh realizations about former heroes of the faith. I saw a lot of good people hurt, and watched as those responsible get away with it. Although I managed to extricate myself from the situation, numerous friends and colleagues have remained involved – so it’s been difficult for me to completely put it out of my mind.

I thought about bringing some memento from my time there, but there aren’t really any rocks possessing that personal connection I was looking for. In fact, about the only “memento” I still had from those days was my old office key. That seemed like it would do the trick, but I didn’t want to litter the landscape with something so unnatural. Then it hit me like flash, like a vision burnt across the sky! What if I put the key in a rock?

I was something of a rock hound when I was a kid, so I knew about geodes – hollow rocks that could be opened up to reveal crystal-lined inner walls. What if I could put the key inside a geode and then seal the halves back together? That wouldn’t be litter – and, as a bonus, it would make for a hilariously confusing discovery if someone ever found it! (Maybe I’ll include a note of explanation.)

I found “break-your-own geodes” on Amazon, but I don’t have a rock saw and I doubted I could break one open with enough finesse to be able to put it back together again. Then I found an Etsy store that sells pre-opened geodes. I messaged the owner with my idea, and he said he would get me one that would work.

One’s Camino rock is supposed to add weight to the pack, of course (otherwise it wouldn’t be a burden to release). But exactly how much will this little project cost me in weight? Now that I am a confirmed gram geek, I just had to know (and you’re still reading, so don’t judge). 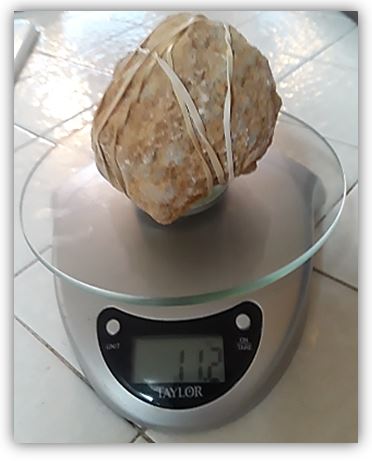