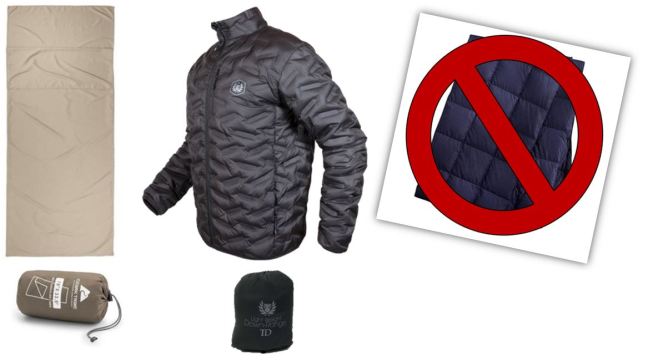 After much deliberation I have decided to remove my down blanket from my sleeping system.

It all started during my first gear packing test when I discovered that the second heaviest item in my kit was my blanket. Even though it was down-filled and not terribly big, it still weighed in at a hefty 26 oz. The only thing heavier was my back-pack!

About this time I was watching one of my favorite gear review channels and came across the TD Down Range jacket. It’s a down jacket which, in case you didn’t know, is a standard part of backpacking gear because they are very lightweight and compressible for how insulated they are. The reviewer (who doesn’t pull any punches when it comes to gear) really liked this jacket. This was surprising, because it was only $110. That might not sound cheap, but it’s a steal for a good down jacket (one reason I’ve never bought one!).

Now, I was originally only interested in this jacket when I thought I’d be climbing Mt. Whitney this Fall (long story, but it’s probably not going to happen). Neither this nor any other insulated jacket was even on my radar for Camino gear, because it will never get cold enough in Spain to hike in such a thing. But then I realized it might be nice for sleeping. I will likely be sleeping in long johns and socks anyway – so if it got cold in an albergue that didn’t provide blankets or wasn’t heated, I could just throw this jacket on. (If not, I’d have a comfortable pillow!)

That sounded pretty good, so I jumped on the website to remind myself of the jacket’s price and features and OH MY GOSH WHAT THE HECK it was on sale for HALF OFF!!!

I checked and I was still able to return my blanket ($40) at Wal Mart. So for $17 I subtracted a 26 oz. Camino-only item and added a nice 11 oz. jacket to my gear for post-Camino adventures. And as if that were not enough, I can also leave my fleece jacket (18.5 oz. – my third heaviest item) behind for a total weight drop of over two pounds!

My $45 sleep system is now technically $62 – but only if you include a jacket with additional non-sleeping, post-Camino uses. And even that is still less expensive than a cheap down sleeping bag that I don’t need for anything else.

I am definitely adding this to my “good idea” list!