So the other night I’m standing in the shower wearing a plastic skirt, sun hat, and biking gloves . . .

I got my nearly final gear shipment the other day and found myself with some time to test the remaining “waterproof” items to see how they performed. Testing was exactly as fun as you probably think it was.

Stuff sacks make packing so much easier and if they can keep your stuff dry all the better. Not expecting much for $10, I tried out Outdoor Products 3-Pack All Purpose Dry Sacks. They have the typical dry bag folder-over-and-clasp design, and they work! After about half a minute in the shower they were still dry inside. The bags turned out to be useful sizes too. 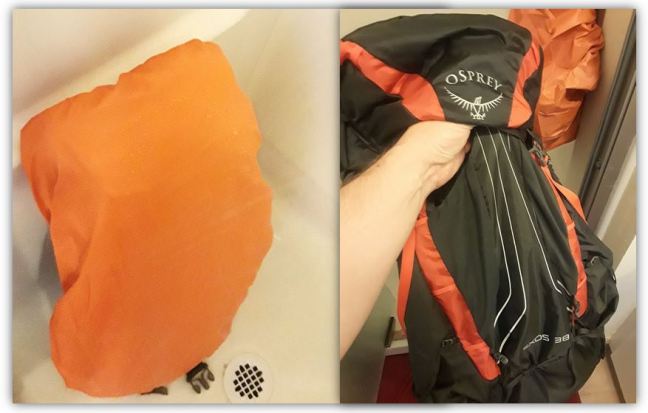 Unfortunately, my backpack doesn’t come with its own cover, and the ones the company sells are rather expensive. I found the highly rated Gryps Waterproof Backpack Rain Cover for $12. Besides the price, I liked that it had an adjustable anti slip buckle strap that cinches it under the straps so it protects the back of the pack and won’t pop off the top (common complaints). But was it truly waterproof?

Yup! After taking a nice shower, my pack was still dry!

I’ve had some close calls with my phones and water damage (also a complete failure involving a swimming pool), so I knew I’d want a waterproof case for the Camino. I chose the Kona Submariner Plus Size Universal Waterproof Phone Case. I already have a nice hard shell case and I didn’t want anything too bulky. The Kona is basically a sealed bag, but it claims to not interfere with the touchscreen or with picture taking.

Correct on all counts! it’s waterproof, you can use all the controls including the screen, and it takes pictures just fine. (Note – in the picture above the case is still in its packaging. The first shot of the instructions is without the case and the second is with it on. It actually looks better!)

I wasn’t sure I even wanted to bring gloves, but some people have said they were handy and if I could find some lightweight ones that were waterproof that would be cool. I got an ad for these miracle gloves that did it all and then found out that (like many of these kinds of products – e.g., the Wal Mart down throw blanket) lots of different companies sell basically the same thing. I tried the SLB Cycling Gloves, Waterproof Touchscreen.

They were only $10, which was suspicious, but they had good reviews so I gave them a shot. After running them under the faucet for . . . oh my gosh instant failure! These gloves are not waterproof at all. My hands immediately felt the water (including its temperature) and then the gloves literally filled with water. To top it off, they took all night to dry (even turned inside out!). I will be returning these after I leave a proper response and review on Amazon. 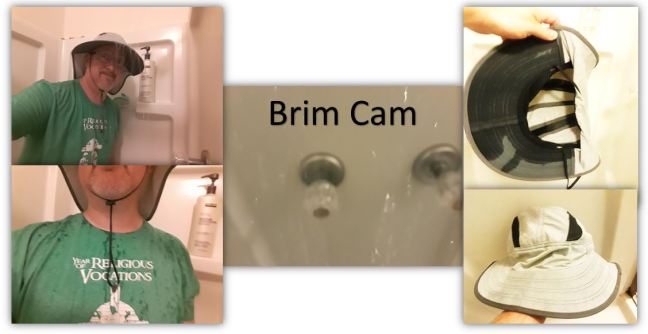 The Sunday Afternoons Unisex Ultra-Adventure Hat was voted number one hiking hat on several review websites seemed like a good choice. One Amazon review said, “it’s waterproof . . . the water just runs right off.” So I put it on, hopped in the shower, and quickly discovered that this applies to the brim only! While it made for an excellent watershed (I even used my phone under it!), the top vents let the water right in and the hat itself soaked through in seconds. Now to be fair, the hat is not described by the company as being waterproof. Fully waterproof rain hats exist, but they are heavier, hotter, and lack some of the other features this one does. I figure that if I get into rain I’ll be wearing my rain jacket and I can just pull the hood over the hat.

In all honesty part of me was hoping this piece would fail. If it didn’t work, my male moral dilemma would be avoided. But it was GREAT! It weighs practically nothing (2.3 oz.), it attaches very quickly (unlike rain pants) and without having to remove any other gear (even the backpack), it doesn’t get in the way while moving (I marched in place in the shower to verify), and it kept everything under it dry.

Oh well, who will I be I trying to impress in Spain?