For some time now, I’ve been involved in a (mostly) great Camino Facebook group dedicated to helping people prepare for their Camino. It’s full of (mostly) helpful folks, and I thought that posting my preparation “vlog” via my YouTube channel would be a welcome addition. And for quite some time it was – I gained 100’s of subscribers and had some great convos on the page’s wall.

But then the Camino Cops started showing up. “Camino Cops” (or “Pilgrim Police”) view themselves as Camino experts who state all of their advice as commandments and interpret disagreement as ignorance. Unfortunately this role is not limited to the page members. 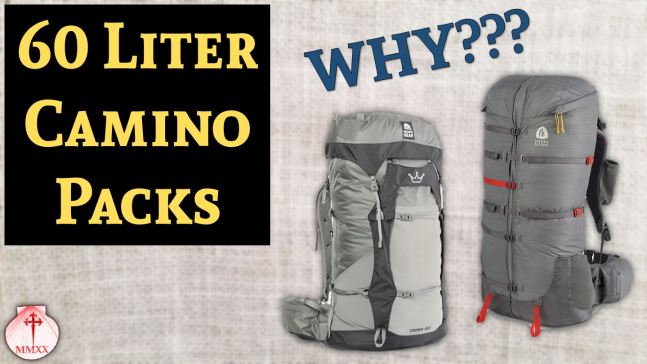 My first notable experience was with an overzealous admin who went ballistic when I had the audacity to suggest that perhaps someone might benefit from a 60 liter (*GASP!*) pack that weighed less than 90% of the bags recommended on that page. Interestingly, that admin was soon banned by another admin I’ll call “CV”. I thought I had found a friend – she seemed to dislike Camino Cops as much as I did!

That same admin  later deleted a review I posted about a pack because it couldn’t be bought at a big retailer. Well, sorry – many of the best backpacks being made are not at REI! This one, in fact, was the “correct” Camino size, was natively waterproof, and weighed only 20 oz!!! But apparently I’d violated another rule in the Camino Cop handbook. Would I ever learn?

The final straw came when I made the mistake of responding to CV’s post which talked about her new shoes and ended with: “I’d love to hear some reviews on what everyone else is wearing.”

I replied with a literal review on what I was wearing. That was my first mistake, as indicated by the following PM I got minutes later:

She made similar comments on the thread. (This from the same admin that wasn’t bothered by a guy who posted a full frontal nude pic of himself on the page!) So apparently the allowable range of Camino options has already been set and I missed the memo.

Another person commented that reviews like these helped her and that, “Apparently it is okay to NOT recommend, but not to recommend.”

Next thing you know, the post is deleted and I’m banned from the group (“Conversation Starter” badge and all!). I didn’t even realize it until I tried to respond to CV. When I hit the ENTER button, the page was gone – I couldn’t even find it when I searched for it! (I’ve never been banned from a page before, I guess this is what happens.)

Well guess what? I have my own blog so I’m going to post my response here!

You asked for reviews of what people were wearing, and I responded with exactly that. Now, I’m sorry if you don’t think I’ve earned the right to have an opinion on my own shoes, and I’m not going to argue about it – but since you’re calling me out publicly on this, I’d like to briefly respond.

First, unlike the ubiquitous Camino Cops, I don’t tell people what to do. I don’t now, and I won’t later. I don’t see reporting what I am doing or reviewing an option as equivalent to a recommendation. I always assume that everyone on here realizes that no amount of personal experience can give someone the ability to tell someone else what will work for them. Walking the Camino doesn’t change that, and neither will walking 100 Caminos.

I have seen plenty of advice on here – much of it conflicting, and some of it objectively mistaken (e.g., sizing packs based on height, or the ridiculous “10% Rule”). But I interpret it as personal reports and file it away. That’s what I’d expect anyone to do with anything I say too. Walking the Camino doesn’t make people into gear experts, but not walking it doesn’t make them ignorant.

Second, as to experience, I passed the 800k mark in my Altras a long time ago – and not just on trails. I wear them when I train in the city and even at the office. I do this for the same reason anyone preparing for the Camino should: you need to train in your gear and not just trust what works for someone else. No one will know what will work for them until they try it themselves! If that fact makes reviews worthless, then they will always be worthless. Again, I assume others know this.

Having said all this, you’re the admin and I will respect your wishes to cease and desist until my Camino is complete!

3 thoughts on “Beware the Camino Cops!”