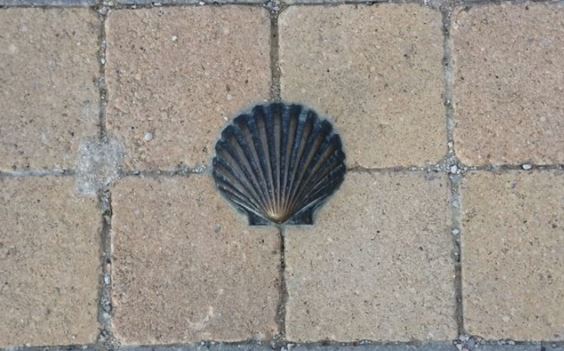 There is nothing more iconic than the Camino Shell. They are used on signs and sidewalks to mark the way to Santiago along numerous routes, and actual shells are worn by pilgrims almost ubiquitously. But the origin story of this symbolic scallop is somewhat mysterious.

Since the Camino is literally the way of St. James, it stands to reason that the apostle would have something to do with it. The St. James associated with the Camino is the brother of the apostle St. John and is designated the Greater (apparently due to his stature compared to St. James the Less). The apostles Peter, James, and John formed an “inner circle” among Jesus’s twelve apostles.

In A.D. 44, St. James became the first apostle to be martyred (Acts 12:1-2 cf. Mark 10:38-39). Before this, however, he was a missionary to Spain. According to tradition, St. James’ body was placed in a ship which wrecked near the Iberian peninsula in Galicia (the northwest sector of Spain). St. James’s body was (miraculously?) brought safely to shore covered in . . . you guessed it . . . scallop shells.*

*There are a few other similar stories which all involve someone coming safely out of the sea covered in scallop shells. It seems to be a thing with the Galician shoreline!

St. James’s body was buried and discovered about 750 years later (A.D. 813 to be exact) by a hermit named Pelayo. Due to a visionary experience, Pelayo found the bones in a place called the “field of stars” (Latin: Campus Stellae – hence, Compostela). The local Bishop confirmed the find, and King Alphonse II  journeyed to Compostela to venerate the relics. His route, now called the Primitivo (or “first”), is what started the Camino itself.

After this, several miracles were credited to St. James including a major victory against the Muslim Moors at the Battle of Clavijo in A.D. 844. The success was attributed to an apparition of St. James. Pope Alexander III declared Santiago a holy city and approved The Order of Santiago (see below). The Cathedral soon became a major pilgrimage destination along with Jerusalem and Rome. 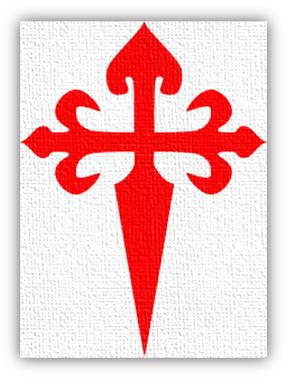 Camino shells typically carry the Cross of St. James. This stylized cross is the symbol of the The Order of Santiago – a military order of Christian knights founded in the 12th Century to protect pilgrims against the Muslim invaders who had encroached into Spain in the Middle Ages.  Like other Crusade-era knightly fraternities, the Order eventually only served non-military social functions – but its symbolism of Camino protection  remains.

While the shell’s origin story may seem a bit fanciful, its symbolism remains. The signs marking the way are essentially the scallop lines without the shell. These form an idealized route map of the Camino. Like the various Camino routes, no matter which scallop line one chooses, they all end up together.

Like many symbolic objects, it is said that the Camino shell once served a more practical purpose as well. Pilgrims would carry the shells to indicate they were on pilgrimage and use them to receive food (sort of a portable plate). My friend David used his shell for a similar purpose on his Camino:

Whatever the full story, the Camino shell has become a popular part of peregrino gear. Perhaps even a bit too popular . . . 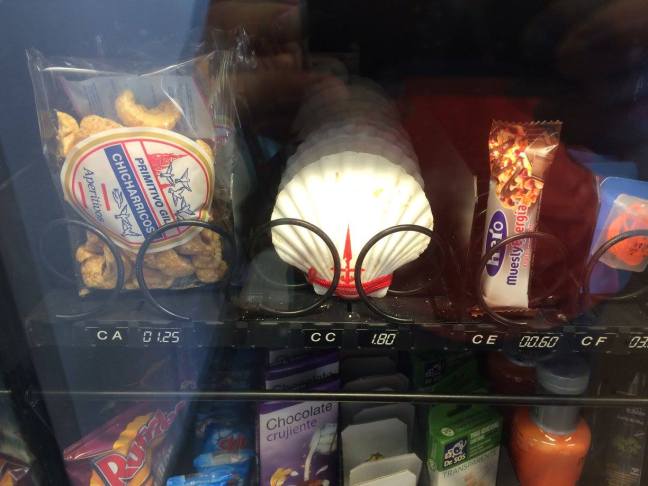 One thought on “The Camino Shell”