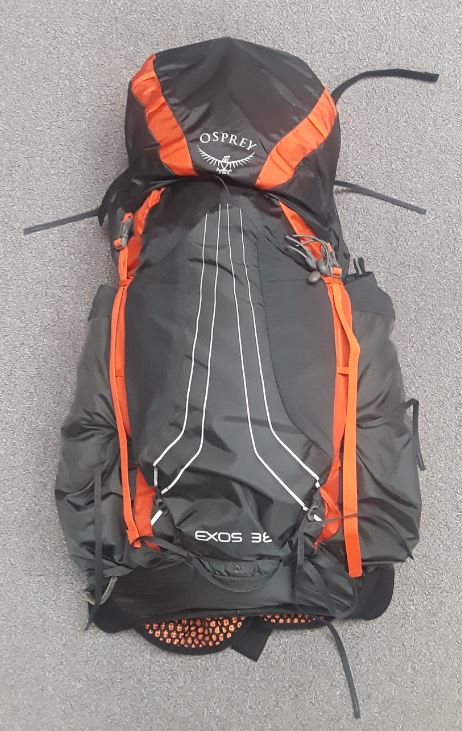 As noted in an earlier post, my Camino backpack is the Osprey Exos 38. “Exos” designates Osprey’s super lightweight line and “38” indicates its volume in liters (for reasons I will explain below, mine is closer to 41 liters). There were a number of things I wanted to test out, so this week I took it on its first hike.

One concern I ran into right away is that my pack is not the right size. When I added it to my Amazon wish list, I wasn’t really paying attention to such details because it was basically just a bookmark and I was not expecting anyone to get it for me! So when I received it as a gift, it was a large (hence the 41 liter capacity).

I didn’t think much of it until I tried it on and noticed the straps connected a couple inches higher above my shoulder than they should. When I got properly measured I discovered I’m a medium in Osprey sizing. And no, there’s no torso adjustment on the Exos packs, so . . . now what?

I talked to a guy at REI and he said that a pack fit like this would less snug and the  weight would be transferred more to the waist than the shoulders. I could see this being a serious issue with a heavily loaded pack – but I wouldn’t be doing that on the Camino. Because I would have no tent, tarp, sleeping bag, food rations, stove, fuel, bear can, etc., my gear weight will be quite low (see below). Therefore the change in weight distribution sounded more like a benefit than a problem! (The rule of thumb is usually 20% on shoulders and 80% on waist.) Worst case scenario, thru-hiker darlings Zpacks makes strap pads I could add on.

Plus I figured if this person made it, I should survive:

Before rushing to replace my pack (= trying to sell it and buying a new one), I decided to give it a real world test. I don’t have all my actual Camino gear yet, so I just stuffed the pack with some heavy winter clothing and whatever else I found lying around until it seemed about equivalent to the amount of stuff I planned to bring.

The Exos is an “ultralight” pack* weighing in at 2.5 pounds. By the time I got it pretty well filled and added several snacks plus my giant Nalgene bottle full of Gatorade, it weighed 12 pounds. Now, another rule of thumb is that your pack weight should not exceed 10% of your body weight. Without going into details, let’s just say 12 pounds is well within 10% of my current weight!

Further, the 10% Rule is completely bogus.

*For some perspective, a backpacking setup is considered “ultralight” if it has a base weight of 10 pounds or less. Once a couple days worth of consumables like food, water, and fuel are factored in, even an ultralight total carry weight can reach or exceed 15 pounds.

Besides fit and weight, I got to test out a few other things I was curious about.

Osprey’s unique trekking pole storage worked pretty well once I got the hang of it. While it’s no quick draw system, only minimal effort is required to get the poles stowed without taking the pack off. They are kept secure with a two loop system that also manages to keep them out of your arm’s way even though you can easily reach them. Clever!

I can say the same for the side pocket bottom access feature. Although it was a bit awkward at first, I quickly got the hang of it. Not only was I able to fit the above-mentioned giant Nalgene bottle in the side pocket, I could remove and replace it without taking off the pack. Sweet!

The Exos comes with a removable “lid” (the top storage container – aka the “brain”). They do this so that you can reduce base pack weight if you don’t need the storage space. Doing so also makes the pack shorter which reduces the pack’s limiting of head motion. I kept mine on and put a bunch of junk in it. I only felt limited by the pack if I tried to look straight up. No big deal, but I definitely knew it was there. When I have exactly what I am bringing, I may take the lid off and use a waist pack for the little things I usually keep in them. This would allow easier access to things I use more often and give me a place to keep essentials when I leave the pack somewhere. (Zpacks makes a small pack that can serve as a satchel, waist pack, and a backpack lid that I might check out.)

The Osprey Exos 38 pack performed very well. Despite being the wrong size, I had no shifting issues, no shoulder or back aches, and when I took it off after 5 miles there was barely even a sense of relief – I just went from wearing a backpack to not wearing one. So, unless I am way off on my gear estimate, this pack will be great!