Well I finally did it. Ever since I discovered the Altra Lone Peak “Magic Shoes” I’ve been itching to test out the waterproof version of the model (the “RSM” – short for rain, snow, mud). This week (thanks to a free $100 REI gift card and their annual sale) I got my chance.

In thew few short months since I first heard of them, I have fallen in love with Altra Shoes. I wear the Cayd at work (which seems to have fixed the issues I was having with my left foot), and I plan to wear some version of the Lone Peak for my Camino (as does my Camino Cuz!).

Altra’s Lone Peak trail shoes come in a few different configurations. They have men’s and women’s cuts in mid-ankle and low ankle and each of these is available in standard  mesh or “RSM” (short for “rain, snow, mud”). I have been training in the men’s, low ankle, standard mesh (let’s call this “LPM). I later compared these to the mid-ankle RSM’s and did not decide to switch because they were too warm for this application. Given my previous experience with waterproof gear, this was not a surprise. Between hiking in water or sweat, I decided to go with water.

However, my cousin got the women’s low ankle RSM’s and swears by them. I also ran into someone wearing them on a very rainy hike, and she loved them (even though they were waterlogged). I decided I needed to get the full experience for myself.

I got these a half size larger than my others because of the issue on my Rough 16k. I am pretty sure it was caused by a pre-existing problem with my previous work shoes, but most hikers go a size up to make room for swelling. I never have, but I figured a half size wouldn’t hurt. My LPM’s fit perfectly day-to-day, but on long hikes or with thicker socks they’re just a tad tight.

I figured I might as well see how Altra handled sizing and the extra half size fit just as I expected – just a tad loose. My right foot seemed to be riding the edge of the insole a bit at first, but I didn’t notice it the next time I put them on.

One thing I noticed right off was the RSM’s felt “rubbery”. They were springy and squeeky and they kind of folded in when I leaned forward (see above pic on the right). This wasn’t uncomfortable like it would be in a leather boot – the material is very soft, so it wasn’t pinching me or anything.

Kind of weird, but so far so good!

For comparison, I took out my LPM’s and removed the insole. The two shoes are similarly stitched, but the inner and outer materials are very different. The LPM is about half mesh (no surprise there – it’s right in the title). TheRSM is entirely enclosed with a piece of waterproof material and the outer layer has no holes at all. For fun, I shone a flashlight into each one to see the spaces or lack thereof.

I assumed the RSM’s were waterproof (and I knew the LPM’s were not), so my primary interest for this comparison was air flow. Lack of air flow results in the two chief complaints about waterproof materials: they’re too hot and once they get wet, they don’t dry out quickly. These results seem to be inevitable, so I was not expecting any miracles from the Altra RSMs.

I should have known better.

First, I walked down the hall at work and ran a few laps around a meeting room to see about heat retention. I could tell right away they were a lot cooler than the mid-ankle RSMs I had tested a few weeks back. There was not much noticeable heat gain at all really, but it was a cold room and I wasn’t going to run around at work for an hour so I waited until I got home to do a real test.

When I got home it was in the mid-70’s. Not the best weather to test heat retention, so I put on my thermal long johns under sweat pants and a rain jacket. Then I put on matching socks and one LPM and one RSM. Likely looking like a madman I went out jogging like that. (To complete the picture, I later stood in my yard spraying myself with a hose.)

Dressed for a 50° day, I was overheating before I even got out the door. After a short run-walk-run-walk outside, I was uncomfortably hot. Neither shoe felt too bad though. Each was definitely warm, but neither was really hot. It felt like the RSM was hotter, but it was rather difficult to tell. It actually seemed pretty darn close.

When I got back, I decided that relying on my feelings was not precise enough to differentiate the shoes (which tells you a lot right there!). Summoning all of my gear geeking powers, I reached for a thermometer.

I took each shoe’s internal temperature five different times and although the results seemed rather scattered, the end result was quite shocking.

They were basically the same.

The average difference was .14° (that decimal is not a typo – it was point one four degrees difference). This might not have been the most accurate method – but it confirmed what I felt (which was – unbelievably – very little difference).

A waterproof shoe that was not hot. I don’t know how they did it, but they did it.

The waterproofing test went as expected. No water got in through the material. I was glad to see the RSM’s did not fail, of course (as has several “waterproof” gear I’ve tested) – but I’d never heard anything but good things about the RSM’s, so I was pleasantly unsurprised that they worked as advertised.

To make things more interesting I decided to see if the Altra Gaiters made any difference in keeping water out of the tops. (Unfortunately my waterproof gaiters don’t work with trail shoes). As far as water resistance, they basically did nothing (nor are they supposed to – they’re made for rocks, dirt, and sand). Water went right into and through them.

To finish off the waterproofing test I completely soaked each shoe inside and out, then filled each one up with water. Here the LPM vs. RSM material difference stood out dramatically. The LPM’s instantly drained, whereas the RSM’s became water bags.

Yup, the RSM’s are waterproof!

Now, would they dry out soon enough to wear again? 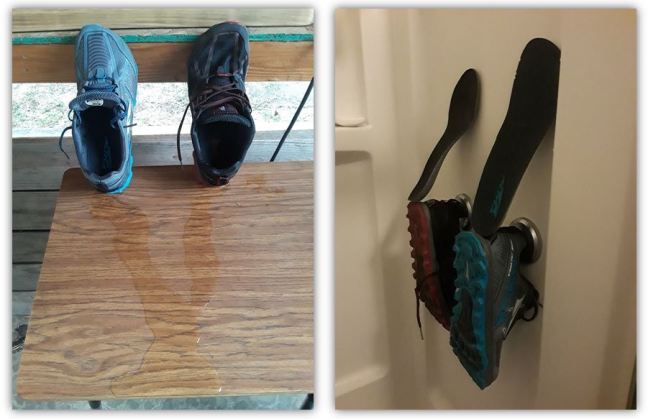 I ran this test in the evening – about the time I’d probably be crashing at an albergue and get a chance to hang them out to dry. I shook the water off (and out) of both shoes, then stood them up outside in a light breeze.

I checked on their progress every half hour or hour. Neither shoe seemed to make much progress after their initial drain, and they remained neck and neck until I went to bed about 3 hours later. I hung them in the shower with the window open to continue drying overnight.

I got up at 6am and went to see what it would be like to put these shoes on in the morning after an evening of soaking. They were both still damp, but neither was “wet.” I felt inside, expecting to confirm my fears that the RSM’s would be full of water . . . and they weren’t!  I reached for my moisture meter. . . . just kidding – I don’t have one of those.

Suffice to say that the RSM’s felt exactly the same as the LPM’s. Again, I don’t know how they did it, but they did it.

While these were not the most scientifically precise tests possible, there was never an indication of significant difference in heat retention or drying speed. The LPM’s and RSM’s felt nearly the same during a hot walk and they dried at nearly the same rate.

Now, I am sure that in other conditions there would be a bigger difference. In high winds, the LPMs will be cooler and drier than the RSM’s. In colder weather, the RSM’s will likely keep feet a bit warmer than the LPM’s. If the shoes get waterlogged, the LPMs would drain off while the RSM’s would have to be dumped. In a light dew or rainy situation, the RSM’s will keep your feet dry whereas the LPM’s would let the water right through.

It’s a trade off to choose either one, but not nearly as big of one as I assumed.